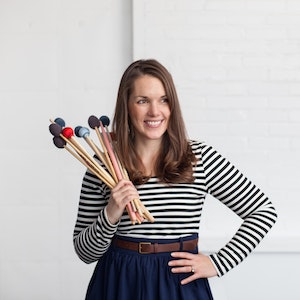 Named a “one-woman dynamo” by The Boston Globe, Maria Finkelmeier is a percussion performer, educator, and active arts entrepreneur based in Boston, Massachusetts. Prior to rooting in New England, she spent three years in Northern Sweden at the Piteå Institution for Music and Media as an artist in residence. She is co-founder of the international percussion group, Ensemble Evolution, with whom she has given performances and masterclasses throughout Europe, Australia, and the US. She also tours with Quartet Kalos, a Swedish-American group (clarinet, cello, voice, percussion) focused on arranging folk music and commissioning new works, and presents a solo program entitled “Human and/or Machine.” A sought after multidisciplinary collaborator, Maria has been commissioned to create works for Aaron Staebell's soloDRUMsolo project, ArtWeek Boston, the Outside the Box Festival, and Illuminus Boston. Maria recently founded the nonprofit, Kadence Arts, devoted to incubating artistic projects, curating performances, and engaging local communities through music making. The organization co-founded the Beat Bus with The Record Co, launched the Times Two Series in partnership with Robert Honstein, and initiated Make Music Boston, a participatory summer solstice celebration.Maria is a proud endorser of Vic Firth, Grover Pro Percussion and Remo.